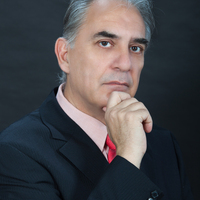 Graduate of Physics, University of Patras, Greece, and ex-student of Edinburgh University- PhD in Physics, Edinburgh University (1980). At present he is Professor at the Dept of Mediterranean Studies, University of the Aegean, Rhodes Greece. He is Director (& Founder) of the Laboratory of Archaeometry, Head of the Dept (2004-2006), and Director of the Laboratory of Informatics, at the Dept of Mediterranean Studies (2005-2010).

His special field is Natural Sciences in Archaeology & Cultural Heritage, though during his carrier he has done research in a range of multidisciplinary fields all of which has been published (and cited) in international scientific journals.

His research and educational activities focus in the interdisciplinary field of Physics and Archaeology. In general his research work refers to a wide spectrum of scientific field of natural sciences & humanities (prehistory, archaeology, art and philosophy). In particular, he has been involved in various subjects in depth with innovative ideas and alternative approaches, all of which have been published in international cited journals, e.g, Nature, Antiquity and many more, on archaeological sciences, nuclear physics, nuclear chemistry, archaeometry (in almost most special fields of the interdisciplinary subject such as nuclear dating, analytical techniques & characterization, archaeoastronomy, geophysical prospection), technology in Cultural Heritage, environmental archaeology, nuclear geophysics & geology, geophysics, palaeoenvironment, astronomy (solar activity and planets, solar-terrestrial relationships, aurorae), and on presocratic philosophy and ancient history of astronomy.

He has written 9 books (4 in English), more than 250 papers in mainly International cited journals, whereas a part (25%) in Greek Journals (mainly single or main author), National Proceedings and Chapters in Greek Books, and he has served as Editor or Co-Editor in 11 mainly international Volumes.

He has been elected as Member/ Fellow in 16 Greek and International Scientific Societies
He has carried several scientific Programmes funded by EU and Greek Ministries.

Amongst his innovative works are the novel methods of studying antiquity and materials culture, such as nuclear dating by luminescence of monuments, the diffusion dating of obsidian tools and recently of ancient metals, novel approaches in seismicity and solar terrestrial relationships and their impact on early and contemporary societies, deciphering early Greek natural philosophy.
His published work is referred to the ICI.

All of this research has been published in renowned journals.

He has a National and International reputation and Impact through his numerous, interdisciplinary and innovative works, participation and organization of International Symposia and Workshops, and Awards that have promoted World Archaeological Science on multileveled Issues (see topics, materials, World locations, and wide spectrum of ICI Journals in CV below). The main characteristic of his work is the in depth and multi applications in several fields of humanities tackled through new technologies and natural sciences.